The U.S. trade deficit continued to narrow in February with a steep fall in imports but a slight increase in exports, which is just a start showing the impact of the coronavirus pandemic.

U.S. exports of goods increased by $0.7 billion over January, the U.S. Census Bureau said Thursday, while goods imports fell by a significant $5.3 billion, narrowing the trade deficit by 9.1% in February

The coronavirus is the main cause of the drop-in imports, as it was disrupting supply chains. The significant decrease in imports is not a good sign, since falling imports are likely to lead to shortages and could decrease consumption, even though the continuous narrowing of the deficit is what the Trump administration wants.

The virus’s negative influence started in February, with many factories in China having shut down in late January and the Chinese economy effectively halted for almost a month. The pandemic has disrupted manufacturing in China, which has also influenced U.S. imports in supply chains. In February, the coronavirus quickly spread to other Asian countries, including South Korea, Japan and Malaysia, which are also essential to U.S. trade.

The coronavirus influence on transportation is the main factor leading to the decrease in U.S. imports.

“Chinese exports were severely hampered by the ports’ being closed in February,” said Michael R. Englund, chief economist at Action Economics, a financial services company. “So our imports of goods from China starting in the second half of February are going to show a huge drop-off.”

As the coronavirus spreads around the world, the port of Long Beach, Calif., unloaded only half the amount of Chinese goods this February as it did in February 2019, according to harbor officials.

Kurt Forsgren, managing director at SG Global Ratings, a financial services company, agreed that transportation issues were depressing U.S. trade. “On the port side, there would be the same exposure to China trade. The ports are experiencing significant declines in container volumes,” said Forsgren.

With the number of coronavirus cases in China declining but rising all over the world, U.S. trade transportation, especially the shipping industry, will have to struggle longer with falling demand. Economists say the decreased U.S. imports will be a major trend in at least next couple months.

Justin Flaten, president of JM Grain in North Dakota, which is a company processes and ships pulses, said though his company was not doing a lot with China since trade war, he was still concerned about how coronavirus would limit people’s daily lives, thus damaging trade. “We’re trying to keep the doors open, but probably the next uncertainty which is common to all industries is, can people stay healthy?” he said.

The U.S. exports are not very obviously threatened by the coronavirus based on the February report, since the U.S. wasn’t feeling anything, said Eric Gaus, the Assistant Director at Moody’s Analytics. It’s mostly like that sort of momentum of exports that was going into the same situation as imports now.

While uncertainties continue, it is clear that the virus will have a negative impact on U.S. trade. For most countries, “Selling anything abroad anymore, so like all of that’s going to stop in March,” said Gaus.vvv 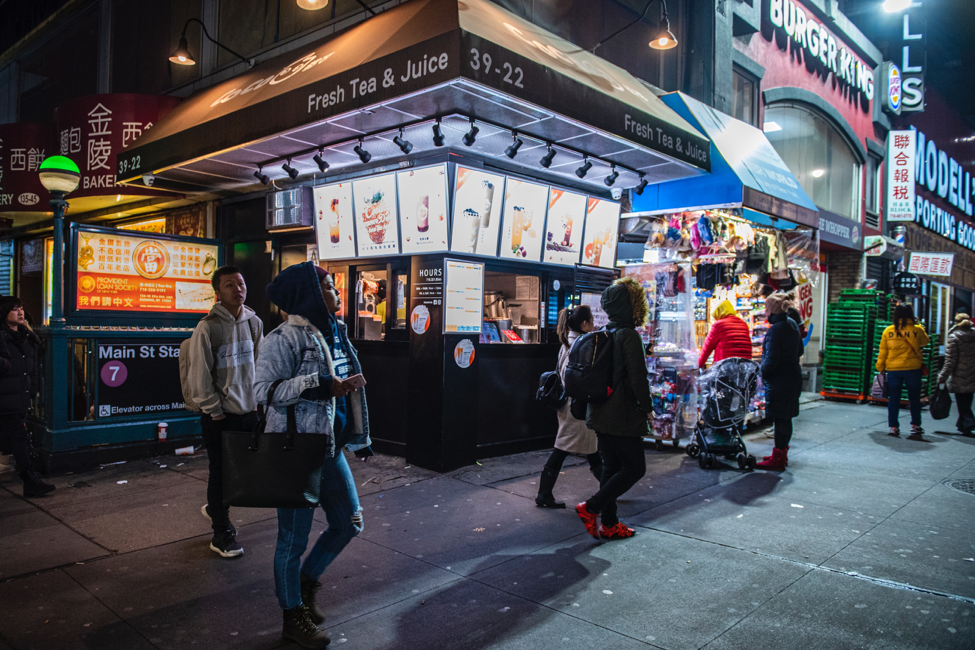 At 10:05 on a Wednesday night in Flushing, Queens, many customers were still coming to buy the most popular bubble tea at Tiger Sugar brown sugar boba milk with cream mousse.

As Flushing’s Chinese population increases, the bubble tea industry is booming. “There are more than 20 bubble tea stores in Flushing,” said Li. “It’s very competitive now, but I think young people here like bubble tea very much, so there will be more and more customers.”

“I never drink coffee,” said Liren Zhang, 23, a Columbia University student who came to the U.S. five years ago. He said buys a bubble tea every time he goes to Flushing. “We don’t drink coffee in China,” Zhang said, “but we always drink bubble tea.”

Another factor may be the trend of “famous bubble tea” made famous on the internet.

Mariska Kop, 22, came to Flushing with her friend Veronica Lee, 22, specifically for Tiger Sugar bubble tea last Sunday. They said they had seen a post about Tiger Sugar in a Facebook group called Subtle Asian Traits.

“It is very popular on social media,” said Kop. “So we decided to try it this weekend.”

If one bubble tea shop is successful, others will follow, said Rebekah Chi, 19, who works at Teas My Dear on Main Street in Flushing. “There are too many bubble tea stores in China, especially some famous ones on the Internet,” she said. “So people here are opening more and more bubble tea stores to make profits.”

Albee Pan, 30, the shop’s manager, agreed. “Under such a trend, it’s not strange that people want to make money,” she said.

Allen Wu, 35, who works at Mi Tea, another popular store in Flushing, explained that theoretically the bubble tea industry was adapting its popularity in China to the U.S. market.

“Mi Tea actually had the first bubble tea that was famous on the internet in the U.S.,” Wu said. “Then more and more ‘famous bubble tea’ came up after us.”

‘Life is too expensive here’: Senior immigrants in Flushing putting off retirement

It’s almost 10 p.m. in downtown Flushing, and Ming Gao is busy cleaning up after a 10-hour day at C J Food Market where he works as a butcher.
Gao seemed tired. “Work is not easy,” he said. “I definitely wouldn’t work if I were in China. Life is too expensive here, and I want to help reduce the pressure on my children.”
Gao, 63, is only one of the large number of seniors living in Flushing who are working past 60, what is a normal retirement age in China. It has been eight years since he immigrated to the U.S. from China.
John Liu, 80, is actively seeking part-time jobs. He ran a small clothing factory before retiring two years ago, but he said he didn’t like retirement.
“If there is a job without a heavy physical requirement, I’ll go for it,” Liu said. “I can earn money while keeping busy. It’s good.”
According to a report this year by the Center for an Urban Future, an independent, nonpartisan policy organization, the number of New York state residents over 65 increased 26 percent over the last decade. Seniors are the fastest-growing segment of the state’s population.
In Flushing, the elderly residents account for 17.5 percent of the population, whereas across the city, that number is 13 percent. But most of the Flushing’s seniors are Chinese. Some are even new immigrants. They are facing challenges in language, culture and finances.
“To be honest, it’s really hard to find a job for new senior immigrants who cannot speak English,” said Penny Shen, a senior coordinator at the Chinese-American Planning Council (CPC) in Flushing, who is responsible for the organization’s Senior Community Service Employment Program. “The possibility of finding jobs depends on applicants’ abilities, but English is a primary obstacle. It might be too late for them to learn English.”
Many seniors in Flushing cannot find regular office jobs because of the language barrier. Many senior men work in restaurants working as kitchen helpers or dishwashers. Some senior women work as home-care workers for Chinese families in Flushing. None of those jobs require English.
Shen also said one-third of seniors who ask CPC to help with job-hunting are struggling financially.
“I don’t plan to retire so far. The living expense in Flushing, especially the housing rent is too expensive. I’ll keep working when I’m still healthy,” said Zhaoyue Sun, 62, a cook at North Restaurant in Flushing since 1995. 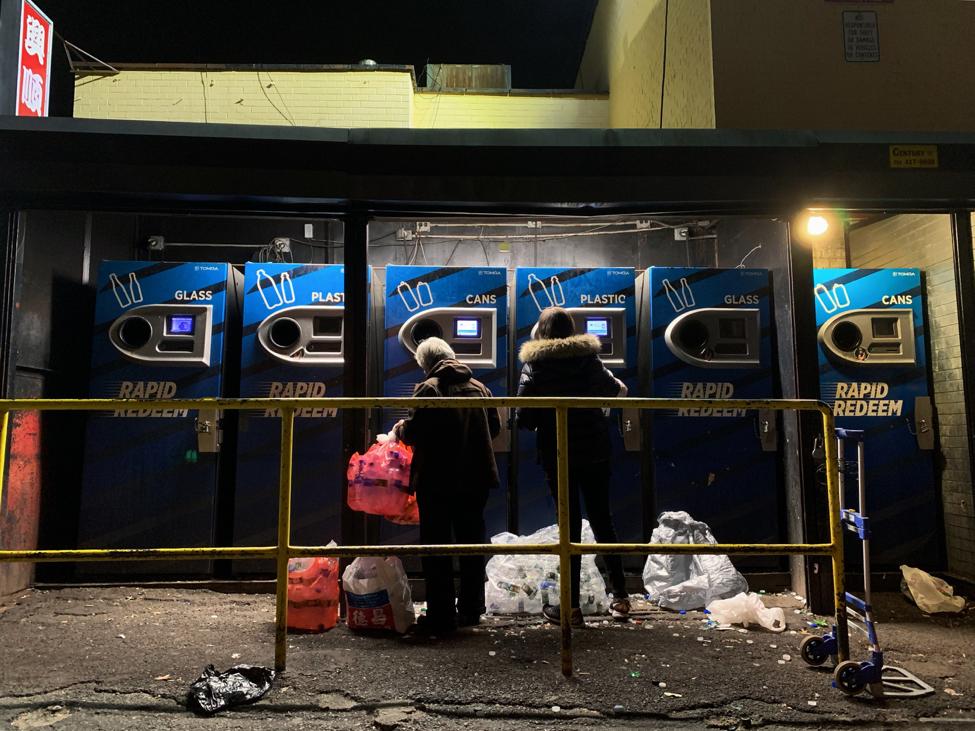 What can 5 cents buy? For canners, a better life

Ning Zhang deftly poured out the water left in a bottle and put the empty bottle into her plastic bag late one chilly November night on Main Street in Flushing, Queens.

“It’s getting harder and harder to find bottles and cans in winter,” said Zhang. “But I’m still checking trash cans and restaurants every day.”

Zhang, 80, originally from Tianjin, China, is only one of many seniors in Flushing who pick up cans and bottles to supplement their family incomes. Similar stories are portrayed by Siyan Wong, an artist who spent five years painting canners in New York City, in an exhibit at the New York Arts Center until Dec 1.

In 1983, the State Legislature passed a New York State Returnable Container Law, setting a 5-cent deposit for recyclable containers, including cans and bottles. That law led to the rise of canners – the people who collect cans and bottles from streets and turn them in for money.

“I saw a woman carrying 600 bottles for recycling,” said Johan Perez, assistant manager at the Food Plus convenience store in Flushing.  “That’s crazy, but she could get a lot of money.”

Zhang immigrated to the U.S. 10 years ago. She cannot speak English. But she gets to know people at every different recycling spot in Flushing. At Food Plus, she puts her cans and bottles into a machine, then stands in the line of customers to exchange her receipt of cans and bottles for the deposits.

“They know me,” Zhang said, speaking in Mandarin. “They know what I’m doing here, and they will automatically give me money back after checking my receipts.”

She said recycling cans and bottles supplements her family’s income. “Who doesn’t want to pursue a higher-quality life?” she said.

Yanhong Wang came to a recycling machine with three plastic bags filled with cans and bottles. She is shorter than the machine, but she stood on her tiptoes to make sure she threw every can and bottle into the machine. “We have to be careful,” said Wang, “The machine is always slow and easily broken.”

Karlin Chan, a community advocate and activist who speaks up for canners on Twitter, explained why so many Chinese seniors work hard to pick up cans and bottles. “Sometimes seniors cannot get jobs here because they cannot speak English,” he said. “They even cannot find a job cleaning restaurants.”

Picking up cans and bottles from trash cans on the street is actually illegal in the city because trash belongs to the companies that pick it up. “Garbage companies are definitely not satisfied with those canners,” said Chan. “They lose money and value, and canners are facing potential arrest for stealing.”

Wong said she respected those canners and supported their right to survive.

“It’s ridiculous to talk about the law that punishes people for trying to survive,” said Wong. “Like illegal immigration, until we recognize that people need to live, they need to survive. The problem is the law, not the people.